Or, read the transcript:

So, my fiancé is not much of gamer, but over the last, maybe 7 of the 14 years we’ve been together he’s really come around. He’ll play some couch co-op with me and even occasionally play some games on his own, which is pretty amazing. But, more often than not, he will just watch me play video games. He’ll sit on the couch and give me his really good advice.

So, this one time I am playing Call of Duty and he’s not split-screening it with me which is odd because that’s a game he will split-screen with me. But, anyway, he is just sitting on the couch, watching me play, giving his usual advice like: “Oh, over there!” or “Look out!”

Yeah, that’s… that’s nice, I think. See, I have these grey hairs over on the side of my head facing him and I can see how he might see them and notice them. But, anywho, I say, “Yay! I like them, too!” And I just continue playing.

He is quiet still. Not giving any advice. But, I can still feel him looking at me. And, finally he says, “They look really good on you.”

Awesome. I continue to play and I say, “Aww, thanks, baby. That’s really sweet.”

Still, he’s just… whatever he’s up to, he’s not done. I can still feel him looking at me and I am playing and there are guns and tags and things I need to do, so I’m not looking at him. So, a few more moments of silence go by and still he’s looking at me. And, I’m not going to look up. I’m just gonna keep playing. He finally says, “I really like growing old with you.”

And just as he says that, I get fucking sniped in the fucking head and die. And, I just turn to him and I say “Shut up.”

I am really lucky to have that guy. 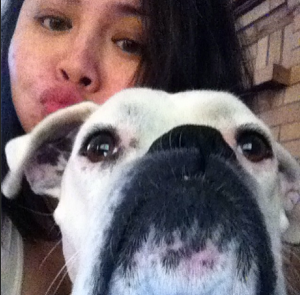 Marie the Bee writes this blog. She’s creating a multimedia anthology of stories from all sorts of gamers, including you. You should Get In Touch and tell her all your stories!