I had a non-gamer colleague once tell me he believed only people without personalities play video games. He said they don’t know who they are, so they pretend to be other people. Their identities wink out the moment they turn off the game. While I do think games provide a tremendous opportunity to role-play, almost all the gamers I know have remarkably strong personal identities. If anything, games enrich these identities with experiences and opportunities that both mirror and surpass those offered by everyday life. Today’s storyteller shares how one game offered him not only an escape from a tough childhood, but the opportunity to find friendship and himself. – Marie

Growing up, video games had always been around and an integral part of my identity. A lot of my hobbies spawned from gaming. Through games I came to writing, anime, skateboarding, programming. Games even shaped my interest in music.

The reason why games were so prevalent in my life? It was an escape from a rough childhood. I was the youngest of three growing up in a household with an alcoholic parent. My siblings were old enough to always go out with friends when there was trouble at home, but I was six years behind them. So, I had to endure my father’s unpredictable temper and mood swings. Then, when I was 13, my mother finally left him, and I was stuck in the middle of the divorce. My parents went back and forth vying for custody, with me overhearing and knowing it was because whoever had me collected child support from the other. Growing up in that environment combined with feeling like the only worth I had to my parents was a child support payment, I had no self-esteem to speak of and just wanted not to exist. I also still had to deal with the consequences of my father’s alcoholism. He couldn’t keep a job; we moved a lot. At 15, I dropped out of high school when he moved us away from my friends. He didn’t even care, he was so wrapped up in the bottle.

During a break in school for my friends, they started playing EverQuest. So, I gave it a go too. I knew it was an online role-playing game, but I didn’t understand at the time quite what that meant beyond an outlet to keep in touch with my friends. One thing my dad was good for was his love of computers and technology. So, even while our phone got shut off, he managed to keep computers around, as well as cable internet. 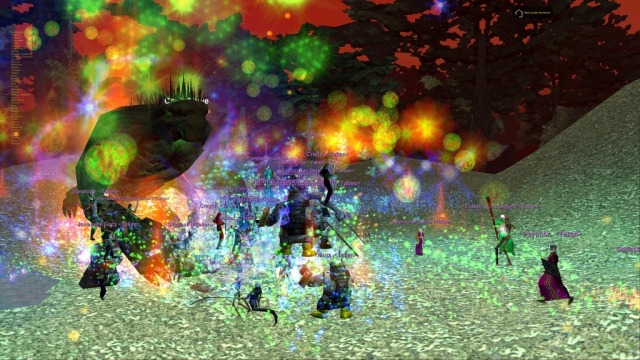 EverQuest was the only real way to still “see” or talk to my friends, but when school started back up for them, I was on my own again. I would spend my days alone in my house trying to coexist with my father. It’s hard to tell what would set him off, or if it would be a good night where he’s too hung over to yell or threaten me. Turning back to EverQuest, I thought it’d be great to get ahead of my friends some since I didn’t have the time constraints they did. We’d play together at night, but then they’d have to go to bed since they had school in the morning. I just kept playing.

Then something interesting started to happen. I started meeting other people on EverQuest – strangers that had no idea who I was in real life or what I was dealing with. I could just play with them and hang out on equal terms. By the nature of that game, there was a lot of downtime, so you’d spend it chatting with your fellow adventurers. Soon, you start to learn who they are behind the keyboard and start making friendships. My real life social circle was limited since I was embarrassed to have anyone around my father – just a handful of friends from middle school or the start of high school. I didn’t have to worry about that problem inside of EverQuest. Everyone just appreciated me for what I brought to the group and my social merits during the downtime. Eventually, I’d start getting pulled into regular groups, and then into a guild. I got a nickname with the guild and I had an identity. Some days I would log in 16 hours of playtime, building a sleep schedule around my playtime. I might be oversimplifying it, but it felt good to belong. All my real life problems were irrelevant. I had VALUE as a person. It may sound corny or depressing, but that was all I had for three years. 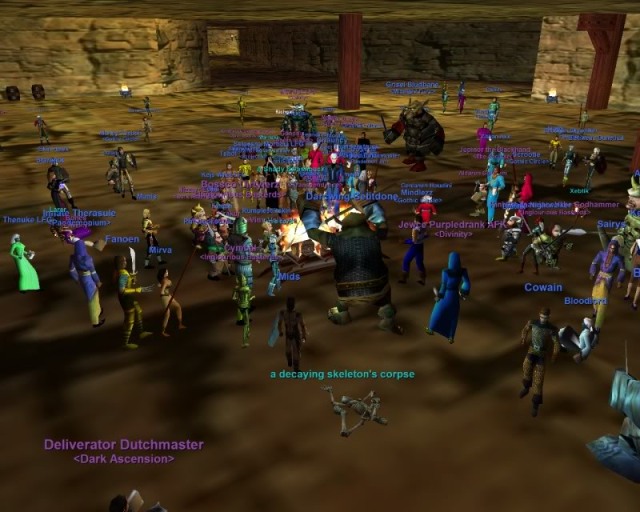 I became close with a couple of friends on there and they knew about my problems in the real world. I’d disappear from the game without giving notice and have to explain what was going on. I’d tell them that my father was drunk and was screaming at me, or causing fights with the neighbors that I had to intervene on. Opening up about that led others to share their problems with me too. I learned from others who had alcoholic parents when they were younger and they told me to hang in there. They were my support circle and helped me understand a lot of things, like the fact that there was nothing wrong with me, that my parents were just messed up people like anyone else in the world. They helped me realize my lack of self-worth was doing me no good. That got me thinking and made me realize I needed to fix my problems myself.

So, I did. Jump ahead a few years later I have a career, a college degree, self-esteem… And a partner that reminds me daily how much she loves and appreciates me. My EverQuest friends? I’m still in touch with some of them, seeing where our lives have gone and reminiscing about the golden years we played together in EverQuest. The game and those relationships got me through the worst part of my life. I honestly don’t know where I would be right now if I had never played that game and built those friendships. It let me have an identity outside of being that scared child. It helped me belong and, from there, find myself.

My name is Chris and I love gaming/tech culture. I pass the time through writing, gaming, and discussing the game industry with anyone willing. My (less interesting) life is working by day as corporate guy around Detroit, MI.

Have a story about games? Get in touch.

4 responses to “It helped me belong and, from there, find myself.”