Elegy for a Dead World is indie developer Dejobaan Games’ new “game about writing fiction” – a side-scrolling exploration game in which you travel to dead and distant planets to craft your own stories about the civilizations that once inhabited them. You then share your stories with other explorers, whose own journals are published for mutual perusal/review.

As game premises go, it’s certainly a novel one! But, I must admit I was initially skeptical. In fact, my knee-jerk reaction was pretty similar to Bart’s after a visit to the dentist:

Still, as more details surfaced about the game, I became increasingly curious.

In Elegy, you play the sole survivor of an interplanetary exploration team sent to investigate three long-dead worlds, your journals forming the only accounts our own people will ever know of these lost civilizations. As it turns out, each of these worlds is inspired by the works of a different (Earth) poet – namely Shelley, Byron, or Keats.

Now, if there’s one thing I love, it’s video games. If there are two things I love, they’re video games and dogs. But, if there are three things I love, they’re video games, dogs, and British romantic poetry. I am exactly the kind of crazypants sucker who does an independent study on Percy Bysshe Shelley for a full semester in college. So, needless to say, my curiosity was replaced by certainty: I was playing this game. After drifting past the wreckage of your failed exploratory mission, you find yourself alone in a peaceful bit of space. Jetpacks allow you to navigate around the area, where you soon discover a portal to the first world. This first world is ostensibly based on the works of Shelley – supposedly the poem Ozymandias in particular, but, um given the premise of the game, couldn’t that be said of each world? Anywho…

Upon entering the portal to this world, you’re provided with a number of choices for how to proceed. I would highly recommend that, on your first playthrough, you do NOT read other folks’ stories, which can taint not only your own efforts, but your expectations of what’s to come. Simply start writing. Don’t worry at all if you don’t consider yourself a writer. A very clever thing that Elegy does is provide a selection of writing prompts to spur your imagination, kind of like a fancy Mad Libs. 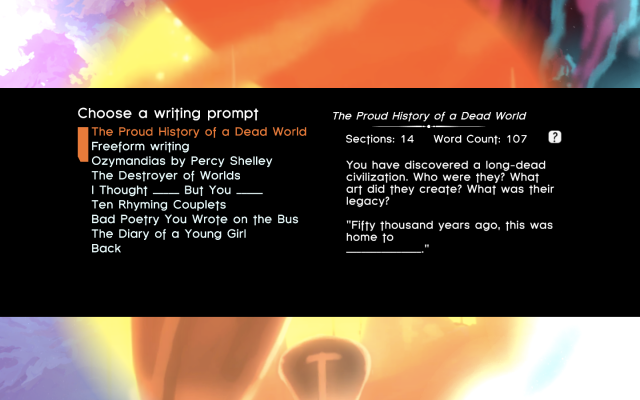 The prompts themselves range from freeform prose to rhyming couplets to academic stub. Whichever you choose, remember that the prompts are merely that: prompts. They’re meant to get you started, but, ultimately, what you write and how you write it is entirely up to you.

Your prompt selected, you are now free to roam about your new world… as long as you only wish to go right and left. 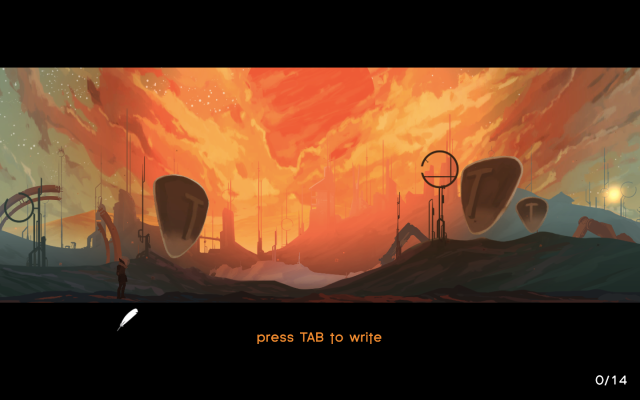 As you roam, you’ll encounter occasional little quills at the bottom of the screen. Each of these contains its own individual writing prompt in keeping with the theme you’ve chosen.

Initially, I found the task of writing on demand – not only for the imagined posterity of the game world, but also for the approval of my fellow players – a bit daunting. I’m not sure what else I was expecting, of course, as it is the stated premise of the game. Thankfully, the writing prompts in combination with the artwork and audio design were incredibly effective creative inspiration. It wasn’t long before I was completely off book – deleting the prompts entirely to take my story in different directions. Within about 20 minutes I had written my first story.

And this is the surprising genius of the game. How many folks ever sit down and say, “I’m going to write a story! An entire story. Right now. In the space of half an hour!?” And of those folks, how many will actually do it?  Elegy for a Dead World is astoundingly, magically, highly effective at creative inspiration, at getting you to write. The individual elements of the game – its art, its sound design, its interface, even the prompts – are extremely simple, almost flat, but work together nicely to create a rich and nuanced atmosphere. The worlds you encounter really do seem to have a history just waiting for you to discover. Oh, yes, you will write.

I believe that most gamers enjoy sitting down to a challenge and overcoming it, and find a particular thrill in having to be creative in doing so. What’s more, writing a story is a fairly unusual challenge for a game to offer. So, yes, it’s fun. It’s neat, it’s novel, it’s kind of awesome. Particularly thrilling for internet narcissists (most folks on the internet?) is the social sharing aspect. Once you’ve completed your story, you can share it with other players to collect their commendations on your work. You can also read the works of others and give commendations of your own, but, true to my internet narcissist nature, I found that less fun. Speaking of me, here’s my story now:

My only gripes with the game center around sharing. The slideshow above illustrates how finished stories appear: words on pages with only minimal visual and none-at-all audio references to the environments in which they were written. This lack of context robbed the stories I read of much of their charm. It would have been a much better experience to stand where another had stood and read her interpretation of the scene, to see just how clever or perceptive or completely oblivious she might have been. That big loud noise-making thing? What did she think of that? The way the finished stories are presented, it’s very hard to know.

You may argue that the scenes serve merely as inspiration and its the stories themselves, free of context, that matter. That is a fair point to make. After all, when you’re reading pretty much anything else, you’re rarely in exactly the same environment as the writer. It’s the writer’s responsibility to make the story come alive. Yes. I totally agree with that sentiment. But, unfortunately for me, I was unable to find any stories that were able to accomplish this, my own included. So, my second gripe with the game is that discovering stories worth reading is very, very hard. Perhaps this will change as the game becomes more widely available.

So, please, please play this game. Do it for yourself! So you can have the opportunity to get your creative juices flowing and write. Do it for indie game developers! So that more experimental and/or unusual games get funded and more cool games created. But most of all, do it for me! So I can have awesome new stories to read.

Elegy for a Dead World is available now for Windows, Mac, and Linux on Steam for $15.

Respond to Elegy for a Dead World – Walkthrough/Review