The child you once were is also dead. 😦 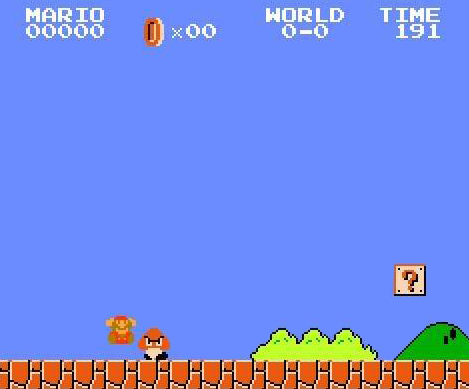 Before I really got hooked, I must have played around with some of the early off-brand consoles at friends’ houses. I know because I remember flashes of light and sound and fun. Maybe some space monsters. However, the first clear memory I have of video games is playing a cocktail table version of Super Mario Bros at a hamburger joint in a college town near my family’s farm in upstate New York.

We were pretty poor, so we didn’t get to go to the burger joint very often. Sometimes in the summer, though, my mom would take us on the way home from the beach. On those days, I’d rush through my food as quickly as I could and plop myself down at the game table. I could never get past the first goomba, but I played over and over again just the same. I was 8, and I was hooked.

Well, a handful of trips after I discovered the game, my mother must have figured out how many quarters were disappearing down that black hole. She finally came to investigate. One look at that goomba killing Mario, and she forbade me from ever again “wasting my savings on this stupid trash.” In addition to being frugal, my mother also prided herself on sheltering her children from what she considered mindless entertainment, especially anything violent. Just to give you an idea: on our three-channel television, we were only allowed to watch PBS— and only for an hour a day.