QUESTION: Is your significant other a gamer too?

Absolutely, she is, in that video games are a part of her life. It is something that I relish more than just about anything else about her. Why? Because she understands my love, she understands a part of me that so very few others have in my life in general – a part that nearly none of my past partners have. It was something I didn’t actually realize I loved about her until this very question. I was, of course, attracted to it subconsciously. I just never thought about it. In addition, it made me realize that there was a point in my life where a relationship, and namely my then-partner’s views on video games, caused me to leave games behind entirely. I am happy to say neither the relationship nor my forsaking of video games lasted a full year.

With my lovely Kyle it was something we had in common: the fond NES and SNES days early in both our lives. We would talk about how neither of our families could afford consoles early in the console’s launch windows, and instead rented or got them much later. It brought us together. We spent quite a few dates at arcades playing Street Fighter, or pinball (she kills me every time, it isn’t even remotely fair), or talking about old games we loved. Once we shared the same roof we actually played less together as our tastes are different. She is all about the puzzle games and pinball. There have been times though, especially early in the Wii’s life. She will still happily tell you how bad I am at Sonic games “Michael can’t even run upside down!!”… or that she can beat the hell out of me at Boomblox. She has no patience or interest in shooters, or sports games, or more realistic 3D games in general. So, I learned early on to recruit our daughter as my sidekick in Portal 2 or Ibb & Obb instead. While she may not play split-screen Call of Duty with me (opting instead to point out HOW MANY TIMES DO THEY NEED TO SAY “UAV ONLINE”?!?!) what she does and always has done is support me (and our daughter) in our love of games, as she shares that love as well. Would I love it if she played more of the games I love alongside me? I don’t think so, but I wouldn’t hate it. I love that she has her tastes and I have mine. I love that I will never beat her at pinball or Tetris, and that if I somehow ever convinced her to play FIFA for just 5 minutes it would end in tears most likely. One of ours. 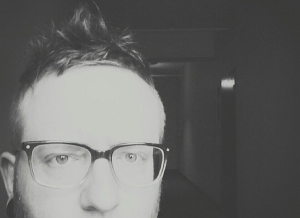 Michael Beach by day is a salaryman and photographer in the Pacific Northwest… who happens to wish that he got paid for the mess of damn video games he plays.

Love games? Love talking about them? Tell me your story!